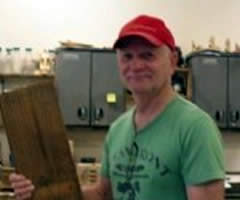 Bob Logan formed the band Rainbow. Perhaps you’ve heard of them? Probably not, unless you spent time in Florida in the early ‘70s. Bob’s Rainbow was before Ritchie Blackmore’s Rainbow. Of course, Ritchie played a Strat, but Bob’s guitar of choice was a 1972 Telecaster. "I just fell in love with it,” he says. “I’ve been playing a Tele ever since with every possible kind of pickup you could put in."

Logan built his first guitar in 1972, which was exhibited a year later at NAMM. But it took a while before he devoted all of his time to guitar. He spent 40 years in construction. Retirement got him back to his passion; Logan Custom Guitars is now in its second decade.

Talking to Bob means you’re going to be talking about wood. He generally uses swamp ash, alder, mahogany, walnut and cherry. Tops are often made with more exotic woods like Spanish cedar, spalted maple, zebra wood, waterfall bubinga, plus flamed and quilted maple. He’s even got a stash of maple that was previously sunk in Lake Superior in the 1800s.

When Washburn quit making custom guitars, Logan got the wood. His favorite, though, is no longer available.

"I was fortunate enough to acquire a couple of beams from Milwaukee where they were dismantling a church. The beams were all pine. I was able to cut 15 bodies with it. They were so light and so resonant, I was just amazed that a guitar could sound like that. I had some special pickups wound by Seymour Duncan for those bodies. Unfortunately, I don’t have any more. They sold so fast."

Another reason they might have sold quickly? Price. Logan doesn’t charge a lot. Most of his builds range from $700-$1200.

He’s got deals with ten pickup manufacturers, but says he doesn’t push any of them. "I just listen to the customer and find out what they want to get out of the instrument, then I’ll help them decide." 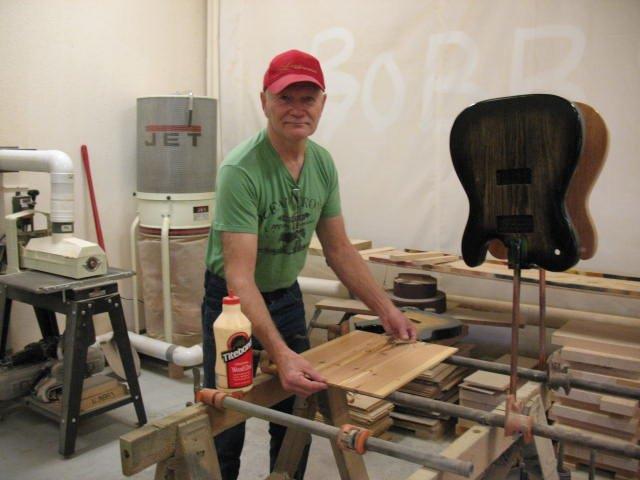 Logan builds the bodies himself, but buys unfinished fretted necks. He rolls the edges, levels and polishes the frets, and puts all of the finishes on them—all nitro. Bob only uses nitro for the bodies, too: "It’s very thin. It ages very nice. It looks fantastic ten years down the road. It allows the vibrations and the natural sound to penetrate the guitar. You feel the guitar resonating."

Bob is a humble guy—he listens to Christian music while he builds—but he’s confident in his abilities.

"I think my guitars compare with just about anything out there. I’m not asking for a lot of money. I have a passion for building them. I have sold over 2000 guitars and I’ve never had a guitar returned to me, ever. I am 100% responsible for what leaves my shop. I don’t have employees. I build them all by hand—no CNC machines. Everything is hand cut, hand finished. And that’s just the way I do it."